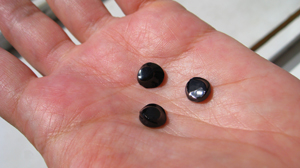 Purified of additives Mumio is black color, shiny on surface. Consistency similar to asphalt. Almost immediately dissolves by body heat (on palm). It has an unmistakable bitter taste and a characteristic smell. Dissolves in water easily. Does not dissolve in alcohol. Fine sediment after stirring must be minimal.

From the chemical point of view Mumio is a natural mix of organic and inorganic matters. It consists of 26 microelements, 10 metallic oxides, 6 amino-acids, steroids, phospholipids, range of vitamins, ethereal oils and other biologically active substances.

Mumio doesn’t have anything in common with mummies (mumia vera aegyptiaca), a substance which is a mixture of powder from mummies conserved with asphalt and resin.

Mumio deposits are located in high mountains of Asia. Local people gather Mumio in caves and rock fissures in hardly accessible terrains at altitudes above 3000 meters. A group sets out for a few weeks’ journey to mountains which results in a few bags of raw Mumio. Gathering of Mumio is usually the only source of income of these people and they keep locations of its deposits in secret. Information about these locations are passed from father to son. Mumio is found on walls and ceilings of caves or in rifts as dropstones or small stalactites which remind tears by its shape (therefore the name Tears of the Mountains).

Texts, photos and graphics are copyrighted and copying without the explicit permission of the author is crime.