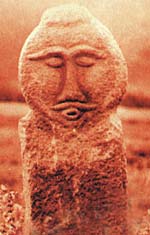 First Mumio references are older than three thousand years. Mumio was not known only in Babylon, Persia, Egypt, but also in Greece, Rome and certainly in Asia. The word Mumio itself (sometimes written as Mumjo, Mumijo, Mumyo) has its word root probably from Greek language – meaning 'body preserving'. It is a name used in western civilization.

Mumio was used as a medicine by Sumerians. Vedas – Indian sacred books write about it. It is often present in medical writings as Susruta-Samhita, Ccaraka-samita, the chineese book of difficult problems. Knowledge about Mumio and its applications were kept secret, and were handed over in families of high ranked doctors only by word of mouth from father to son.

Mumio is mentioned in works of such great men as Aristotle, who researched effects on people and recorded various applications, and in works of his student Alexander the Great and others (Shirasi, Tabib).

The Church also knew (and knows) Mumio very well. As well as the most famous medieval representatives of medical science as Avicena, Paracleus, Agricola, Quiricus, Servet.

Texts, photos and graphics are copyrighted and copying without the explicit permission of the author is crime.